Home
close
← Back to News Tagged with: Elementary, News Releases 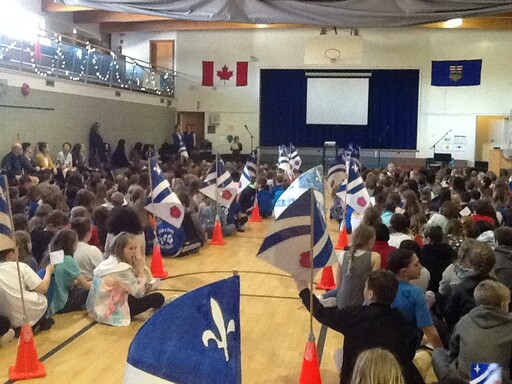 Sherwood Park, AB. — As part of their month-long celebration of “Mois de la francophonie albertaine,” the students and staff of École Campbelltown donned white and blue clothes yesterday and held a special flag-raising ceremony for International Francophonie Day. This day, also known as “Rendez-vous de la Francophonie”, is an annual event celebrated on March 20 around the globe in an effort to promote the French language and Francophone culture.

“The flag-raising ceremony helps our students develop a better understanding of French history, language and culture,” says Lisa Sauder, the principal at École Campbelltown. “Together we’re embracing and sharing our love for the language, the beauty of its cultural expressions and its rich heritage.”

The students and staff at École Campbelltown used the raising of the Franco-Alberta flag as a way to celebrate French language and culture here in Alberta, but also incorporated a larger educational component. Through various speeches and presentations, the school learned about what their celebrations and activities mean in the context of a global community of French speakers. “What I like about Rendez-vous de la Francophonie is that we learn about French culture in Alberta and in other places too,” says Caitlyn, a Grade 6 student at École Campbelltown. “It makes me proud to be able to speak French. It’s also really neat we have a Franco-Alberta flag.”

As part of the ceremony, the school sang many different French-language songs. While most of the songs were familiar to students, Gilbert Bérubé’s Grade 6 class had a special treat—an original song written by Bérubé and performed in front of the whole school. The song, Vu d’en haut, is about looking forward to growing up, and celebrates the transition from childhood to adulthood. “Music is such an important element of culture,” says Sauder. “This song is a beautiful gift to our school, and I know that our students will remember and treasure it for years to come.”

École Campbelltown serves approximately 570 students in kindergarten to Grade 6 offering a French Immersion program, and is one of 43 schools within Elk Island Public Schools. More information about the school is available at www.campbelltown.ca.