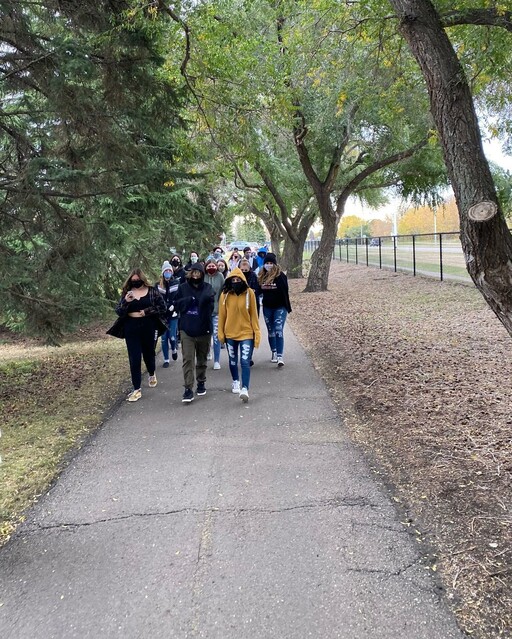 Sherwood Park, AB. — This week, schools across the Division are taking part in the annual Terry Fox School Run, a country-wide event to raise awareness and funds for cancer research. Though this isn’t the easiest year to organize a large-scale run, schools are still finding ways to show their commitment to the cause and ensure Fox’s vision of working toward a cancer-free world lives on.

EIPS students and staff are taking time out of their schedules to run or walk a set distance in memory of Terry Fox. Divided into smaller cohort groups this year, the event is spread out over several days to ensure distance and safety is maintained.

“Each teacher signed their class cohort up for a specific time, and are following a mapped-out route for their walk,” says Erin Zuke, a teacher at Salisbury Composite High. “Even under the circumstances, students are able to get outside and recognize this amazing cause while remaining socially smart.”

Since first participating in 1992, EIPS schools have raised hundreds of thousands of dollars for the Terry Fox Foundation. Last year alone, schools across the Division raised close to $39,000, all of which was donated to the foundation and used to help support Fox’s dream—finding a cure for all cancers.

“Even during such troubling times, it’s heartening to see students and staff finding ways to keep his memory alive,” says Trina Boymook, the Board Chair of EIPS. “There’s no better way to celebrate the Terry Fox School Run than with a message of perseverance and hope. Students are seeing they can work to make a difference, even when there are obstacles in the way.”

Founded in 1981, the Terry Fox School Run has evolved into one Canada’s largest fundraising events. To date, the foundation has raised more than $800 million in Fox’s name for cancer research. EIPS congratulates all staff, students, volunteers and community members who participated in this year’s Terry Fox School Run.

Elk Island Public Schools is one of Alberta’s largest school divisions, serving approximately 17,400 students in 43 schools. We are proud to be an integral part of our communities, including Sherwood Park, Fort Saskatchewan, Vegreville, Strathcona and Lamont counties and the western portion of the County of Minburn.