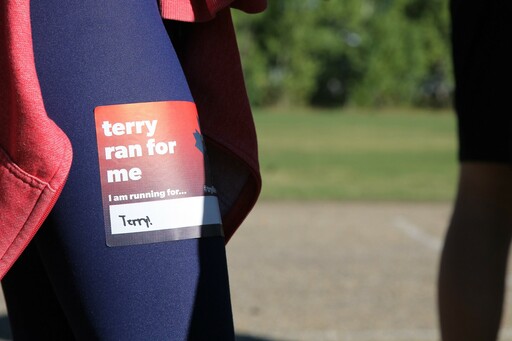 Throughout September, students and staff are joining forces with schools across the country and participating in the 2021 Terry Fox School Run, an annual event held nationwide by schools to raise money for cancer research. The official run day is September 29—some schools held the event earlier because of scheduling. Throughout the day, students and staff take time out of their schedule to run, jog or walk a set distance in memory of Terry Fox. They’ve also spent the month organizing fundraising activities and learning about Terry Fox’s life.

“Terry Fox’s story holds lessons for all of us,” says Trina Boymook, the Board Chair of EIPS. “Whatever obstacle he faced, time and time again, Terry proved great things can be accomplished through strength and perseverance.”

Since first participating in 1992, schools across the Division have raised a substantial amount for The Terry Fox Foundation. Last year alone, EIPS schools raised close to $18,000. All money raised during this year’s Terry Fox School Run will again go to the foundation and used to help support Fox’s dream—finding a cure for all cancers.

“In addition to raising money for cancer research, the run helps keep the memory of Terry Fox alive,” says Boymook. “Every year, our students are touched by his story, share his accomplishments with others and feel empowered to make a difference themselves, which is incredibly powerful.”

Founded in 1981, the Terry Fox School Run has evolved into one of the largest fundraising events in Canada. To date, the foundation has raised more than $800 million in Fox’s name for cancer research. EIPS congratulates all staff, students, volunteers and community members supporting this year’s Terry Fox School Run.

Elk Island Public Schools is one of Alberta’s largest school divisions, serving approximately 17,000 students in 42 schools. We are proud to be an integral part of our communities, including Sherwood Park, Fort Saskatchewan, Vegreville, Strathcona and Lamont counties, and the western portion of the County of Minburn.