Learning from the Land: Truth and Reconciliation as a Lived Experience 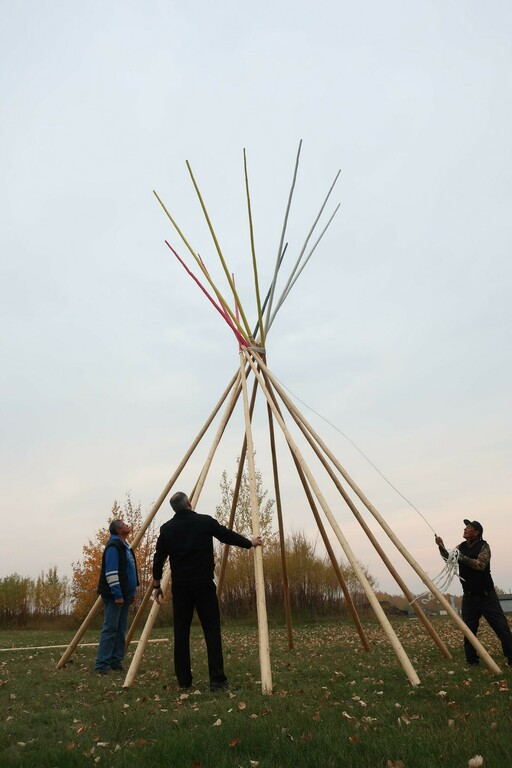 Sherwood Park, AB. — Sherwood Park residents may have noticed recent additions to the grounds on which Elk Island Public School’s Central Administration buildings reside. Tipi poles and a sharing circle have recently been added to the site—the first steps of a project intended to build understanding about the significance of the land for First Nations, Métis and Inuit in the community, throughout the province and across the country.

To honour the teachings of Elder Wilson Bearhead, EIPS has created land-based learning spaces at many of its schools so students may continue to expand their knowledge, grow their connections with the natural world, and understand the history of the land. Under Elder Bearhead’s guidance, the installation of the tipi and sharing circle at EIPS Central Administration is an extension of that commitment to bring life to the Truth and Reconciliation Commission’s Calls to Action, a way to establish its responsibility as a Treaty 6 partner, and build understanding of the meaning of our Land and People Acknowledgement.

“It’s so important to know the story of the land we call home,” says Cheryl Devin, First Nations, Métis and Inuit Education consultant, EIPS. “Having this place to gather will help create an understanding of who First Nations, Métis and Inuit were before colonization, reinforce the magnitude of what was lost when the land was taken, and share the stories of resilience and resurgence as we are still very much here and connected to our lands.”

In early October, Elder Bearhead arrived to erect the poles for the tipi, which he harvested and prepared himself, and painted with the colours of the Nakota Sioux’s medicine wheel—red, yellow, white and black. The poles of the tipi rise into the sky as a sign of connection with the Creator even as they are firmly planted in the ground as a connection to the earth. The tipi’s entrance faces the east and the back faces the west, which symbolize the rising and setting of the sun.

On October 21, a permanent sharing circle was carefully set up beside the trees on the north side of the EIPS Administration building. The circle is a sacred shape which promotes connectivity, equality and respect; everyone who sits in the circle has an equal voice and a right to be heard. It is a place to share and receive wisdom, for people to come together and grow in understanding.

While the site was originally intended for the use of EIPS staff and students as they continue learning about First Nations, Métis and Inuit histories and cultures, the Division believes it has the potential to become an important touchstone for members of the community who want to expand their knowledge and finds ways to further appreciate the land we all share. Plans are being made to include interpretive information at the site helping explain the significance of each part of the installation, and to encourage people from throughout Strathcona County to use the site to come together in the spirit of Truth and Reconciliation.

Elk Island Public Schools wishes to express its gratitude to Elder Wilson Bearhead, as well as the members of the First Nations, Métis and Inuit Education team—including Jeremy Albert, Advisor; Cheryl Devin, Consultant; and Harlee McArthur, Family School Liaison Worker—for their patience, compassion and leadership on this project, and the ongoing work being undertaken in schools and departments throughout the Division. 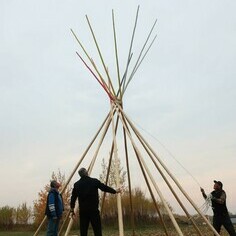 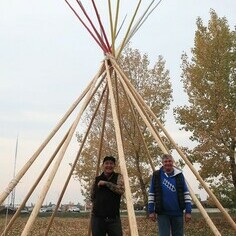 Elder Wilson Bearhead and Joe Ground beside the erected tipi